Visual artist and founding member of Le3 creative studio, his works essentially articulates the interaction of his creations with the architecture and urban elements surrounding him. This process has successfully brought numerous artistic projects to completion, combining Street-Art, kinetic installations, digital creations and Video-Mapping. Showing the desire to see his works in the street, he developed his own tools allowing him therefore to project his creations in any location that inspires him.

Hi Julien! How do you identify better, as a photographer or a visual artist?

I am actually a self-educated artist, I love working the image in general. I have start making video-mapping 7 years ago, and I wanted to create  trough Safari Urbain a new atmosphere by taking my pictures.

What was the though process behind the inception of your project “Safari Urbain”?

In 2011, we create a motion mapping video  called « Golden Tiger »  with my friend Romain Vollet. The idea was to put a video-projector out of it context : the street. That was an exciting adventure that leads me to think of Safari Urbain.

Is there a connection between animals, dresses and places?

My characters are dressed more like parisian street fashion(istas), and I want to keep spontaneity in my work. Sometimes the location inspires me to project one of my characters and other times the characters will feet more in others  spots. It depends on my feelings and how the architecture around me looks like.

“I just want to feel free when I am performing to project wherever I want…I would suggest without imposing.”

Why did you choose to merge street art with video mapping?

I create my own tools to get a flexibility  and simplicity. I just want to feel free when I am performing to project wherever I want. The video mapping enables to make monumental images in various contexts. I would suggest without imposing.

What were the biggest technical difficulties?

No technical difficulty in general, I wished I have a power supply not so heavy 😉

This is a critique of fashion, in one of the fashion capitals of the world. How do you think this project was received by Parisians?

It’s actually more a vision and a reflexion about the fashion trends, and the street art  rather than a review. The feed-back that I have when I performing is pretty good. People are attracted by these projections, make a stop on the street and systematically take a picture with their phone.

Did you have a team working with you on this project or was it a one-man job?

I have launched this project by my own, with a support of friends, family.

Do you want to carry on with this project in other cities?

Off course, the aim is to have new characters in several cities. I made it in Paris, Geneva for the moment and I am planning to do it in Orlando in November.

Are you working on any new projects at the moment with your studio Le3?

We have others projects going on with my design studio which will be a little bit similar to this one : « Holofighters ». We love putting the city as a real playground with interactive installations. 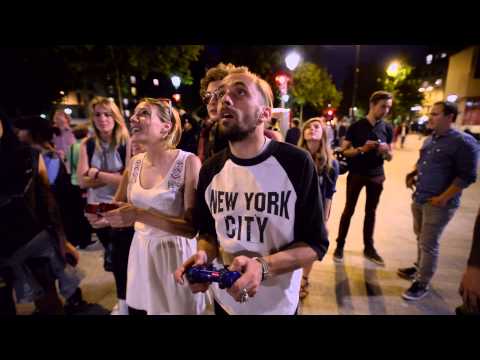