Marrying together high and low culture, sculptor Mike Leavitt’s work explores popular culture and contemporary society through his work. From presidential candidates to visual artists, he approaches his subjects with an ingenious wit, that reveals as much about them as the society that they are part of.

For his most recent work, Mike Leavitt has focused on the people whose faces might not be so familiar, but who’s creations have become cult classics. King Cuts reimagines famous directors through their characters, so that Alfred Hitchcock becomes a bird smoking a cigar and Tim Burton dons a  Batman – Joker outfit with scissor hands. It’s a clever approach to reveal the faces behind the characters, or as Leavitt says “the wizards behind the curtain”. The wood sculptures are an ode to some of the best storytellers around, tinged with satire.

“I’m more interested in the faces behind the camera, not in front of it. These are the people that literally create the faces in front of the camera. Their magic wouldn’t exist without the wizards behind the curtain. I’m a historian searching for the beginning. I want to find the source. Focusing on the faces in front of the camera could distract from my mission. Film directors generally have a larger scope than movie stars, singers, and other celebrities. They craft a vision. They don’t just read a script and take direction. They bring a story to life. This requires the skills of a visionary.”

Most of Leavitt’s hand-carved wooden film directors become strange hybrids between human and fantasy, emphasising the power of film to conjure up the imagination and create fantastical worlds. At the same time, the faces are realistic portrayals of the directors and stay clear of satire. Many of these directors are undoubtedly consumed by there work and in Leavitt’s work they become one, their bodies taken over by their characters.

With each of his King Cuts sculptures comes a little story about the director and their work, it reveals more about the director and alludes to the characters that are part of the sculpture. Take for example this one about Miyazaki; “Hayao Miyazaki is a quiet forest spirit. He serves Princess Mononoke well. His signature apron is a ghostly shroud. It protects him from getting Spirited Away by a river dragon with no face. Luckily the loyal Totoro sits atop his back. The legs of Howl’s Moving Castle can only carry him so far.”

“You know that person’s work. It’s the face behind the mask, the person behind the camera, the wizard behind the curtain.” 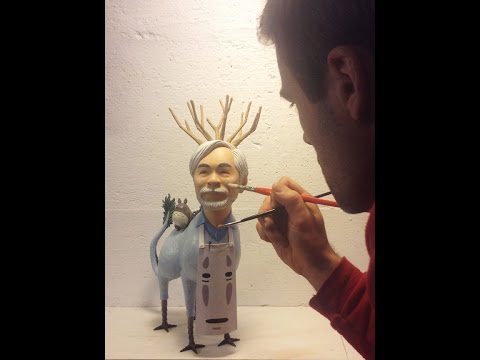 This is pop art with soul. American visual artist Mike Leavitt, aka ‘ReMike’, founded The HiPop (“hai-pop”) Project to marry high and low with consumer satire projects. His process of making and re-making objects includes painting, sculpture, product design and product parody. Since quitting Brooklyn’s Pratt Institute as a freshman with a 4.0 GPA in 1997 he’s executed over 122 exhibitions around the world.

She is Dutch, was born in Germany, and growing up moved around across the world.

The mystic world of Alexandra Levasseur